rumba on the moon

“Everybody knows the moon is made of cheese” — Wallace & Gromit

Thirsty for dreams and hungry for the unknown

Rumba the little mouse is hungry. Hungry for cheese, for adventure, for life and for dreams. Like a child who puts everything in its mouth in order to taste the world, Rumba wants to eat the wide and delectable unknown that she glimpses through her window when the clouds part. So, in the light of the beautiful round moon – which as everyone knows is made of cheese! – Rumba, eyes wide shut, goes through the looking glass like a mousy Alice…

In this musical dream without words, Rumba dives into her imagination. The world around her keeps changing: the ground slips out from under her feet and floats; puppets and animated figures appear, pass by, slip away and disappear in a dancing mirage. Real world objects are transformed, blended together and seen through dream lenses. They become furrniture: a bobbinbird, a cat-a-box, a winephant, and cheesewhiskers… And all of nature – flowers, seasons and plants – dances along with her.

Through the Looking Glass

“I had the idea for, imagined and wrote this piece by playing with images like the words of a poem: rhyming colors, characters, sounds and seasons. Inspired by the work of directors like Philippe Genty and James Thierrée, I eschewed classic dramatic structure and chose to take our young audiences on a voyage told with the vocabulary of dreams. Like Alice running after her rabbit, we follow Rumba as she falls asleep… Going behind the translucent curtain, we pass through the “looking glass” and plunge into the depths of the imagination, where puppets manipulated by unseen puppeteers and animations projected invisibly play with our perceptions.”

With musics by
Pascal Comelade

Created in residency at the

With the aid of 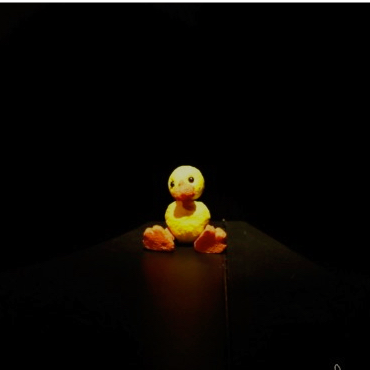